First of all let me apologize for not getting as many posts out over the last couple of months as I had hoped for. I am splitting my fun time between two blogs, a YouTube channel and actual hobby and game play. It is an extreme balancing act to say the least. 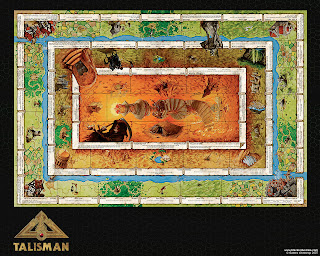 Our group has not played much D&D since Thanksgiving due to holiday schedules and such. We met a few times to play some alternate games such as a one shot horror themed game, board game or some other fun alternative.

Last Wednesday was our first get together of 2012 and we had 6 guys in attendance and were only missing one who was still on holiday vacation or break. Since there had not been much free time for Mike to work on his next installment of Telengard we pulled out Talisman and played that. We did a random dealing of two characters and each person picked one of those two to play. I had ended up with Monk or Wizard. Since I almost never play a caster in any game I took the Wizard.

If I remember correctly Tom was a priest, Richard a troll, Mike a thief, John a warrior and Aaron was the sorceress and the only other evil player to start the game besides my wizard. I had not played this in approximately a year so it took a few turns to get things figured out for me but then it went smooth from there.

I quickly found myself collecting followers and objects to help me build up my character. It wasn't long before I found myself increasing my strength and casting abilities to close to 10 a piece. This did begin to paint a bit of a target onto my back and I had a couple of the guys doing what they could to try and take some of my objects or spells from me. I even had the priest use a spell on me to hold me in place so I couldn't move that turn. All of these shenanigans took place on the first level region. Mike's thief ended up advancing to the second tier first and then I think Richard's. I ended up getting lucky enough to advance not just to the second tier but straight to the third. I then was able to work my way to the crown of power one turn at a time and began issuing challenges to tick down everyone's health. Richard ended up getting the closest in the third tier but he also ended up losing his last health before making it to the top to challenge me for the crown.

We ended the night with most everyone conceding to my victory other than Mike who kept rolling and trying to make it to me. Everyone but Mike had began cleaning up the table including me and I didn't even recall what cards I still had available to try and fight him off before he got to me. So I guess this victory goes to the Evil Wizard with an * in the book!

All in all I have had fun with this game the couple of times I have played it. This is the first time I made it to the final tier which definitely added some new parts of the game that I hadn't been involved with before. Everyone kept fairly civil and though everyone was out for themselves in a mildly competitive way, there were some good rivalries as fights were breaking out and items shifting owners several times. I demonstrated how karma works by not getting Tom back for planting me in my spot and not allowing me to move, but actually used a spell to heal him! This was actually a tactical move of course because I wasn't seeing much of a threat for my own health so wanted to switch that spell card out for something else I may used more to my benefit.

There were some good laughs though. I do recommend this board game to anyone looking for fantasy themed games.
Posted by 2nd Chance Adventures at 10:32 AM